Archive Of The Category ‘homes‘

ZNE guidance for CA architects (& others!)

The American Institute of Architects California Council recently published the Zero Net Energy Primer. I had the privilege of developing the Primer for them under a contract with PG&E. The Primer (if I do say so myself) is a handsome, concise, and accessible guide — a mere 24 pages, including lots of pictures of ZNE homes of all flavors (small, large, single- and multifamily, luxury and affordable). The AIACC’s goal in publishing the document is to ease the task facing California architects with the roll-out of the State’s 2019 energy code (“Title 24”). The new code will go into effect January 1, 2020 and — while it doesn’t quite get us to ZNE — represents a significant advance in residential energy performance, and the first time that homes will be required to install renewable energy systems. (Of course, there will be byes for projects where it’s simply not feasible to install them.) The Primer will, I hope, help architects get a handle on the ZNE requirements ahead of the looming 2020 deadline.

Kudos and many thanks to designer Debra Turner for the engaging design, and to architect Steven Lee for his terrific illustrations.

A recent email thread involving a group working on a video about ZNE design prompted me to raise one of my favorite subjects. Say I, “Will you talk about the critical importance of roof design?” Queried Steve Mann in reply, “Do you have something more specific in mind?”

I’m so glad he asked! It gave me an opportunity to vent (pun intended) about this topic, which I find is absent from far too many conversations about ZNE home design. Here’s what rolled off the keyboard.

So a simple roof is an all-around win: save money, improve thermal and moisture performance, get to ZNE more easily.

It’s time that we rekindle a time-tested aesthetic, one that finds beauty in simple, elegant, well-proportioned forms, robust materials, and quality of craft. One of my favorite architects who has complete mastery of this approach is Steve Baczek. Not coincidentally, Steve spent many years working with Joe Lstiburek and Betsy Pettit at Building Science Corporation — he’s also thoroughly conversant with building science. Take a look at Steve’s portfolio for inspiration!

Is there such a thing as TOO MUCH PV on your roof?

The State of California, however, has another view, revealed through planned changes to our venerable energy code, Title 24 Part 6.

Around a decade ago the State set “big, bold” goals for all new homes to be ZNE by 2020 (also, for all new commercial buildings to be ZNE by 2030). However, in the intervening years since those goals were established, a few devils have been found amidst the details. One such Aha is that, while conceptually having a home produce enough energy to supply its own needs on an annual basis makes perfect sense, at high rates of adoption this presents some grid-level challenges. Specifically, most of the renewable energy production will come from rooftop photovoltaics on sunny afternoons … hmmm … but that’s not when most of the demand occurs! The demand peak occurs later in the day, when people come home and start to cook, tinker with their thermostats, etc. This imbalance is illustrated in the rapidly-becoming-famous “duck curve” graph. 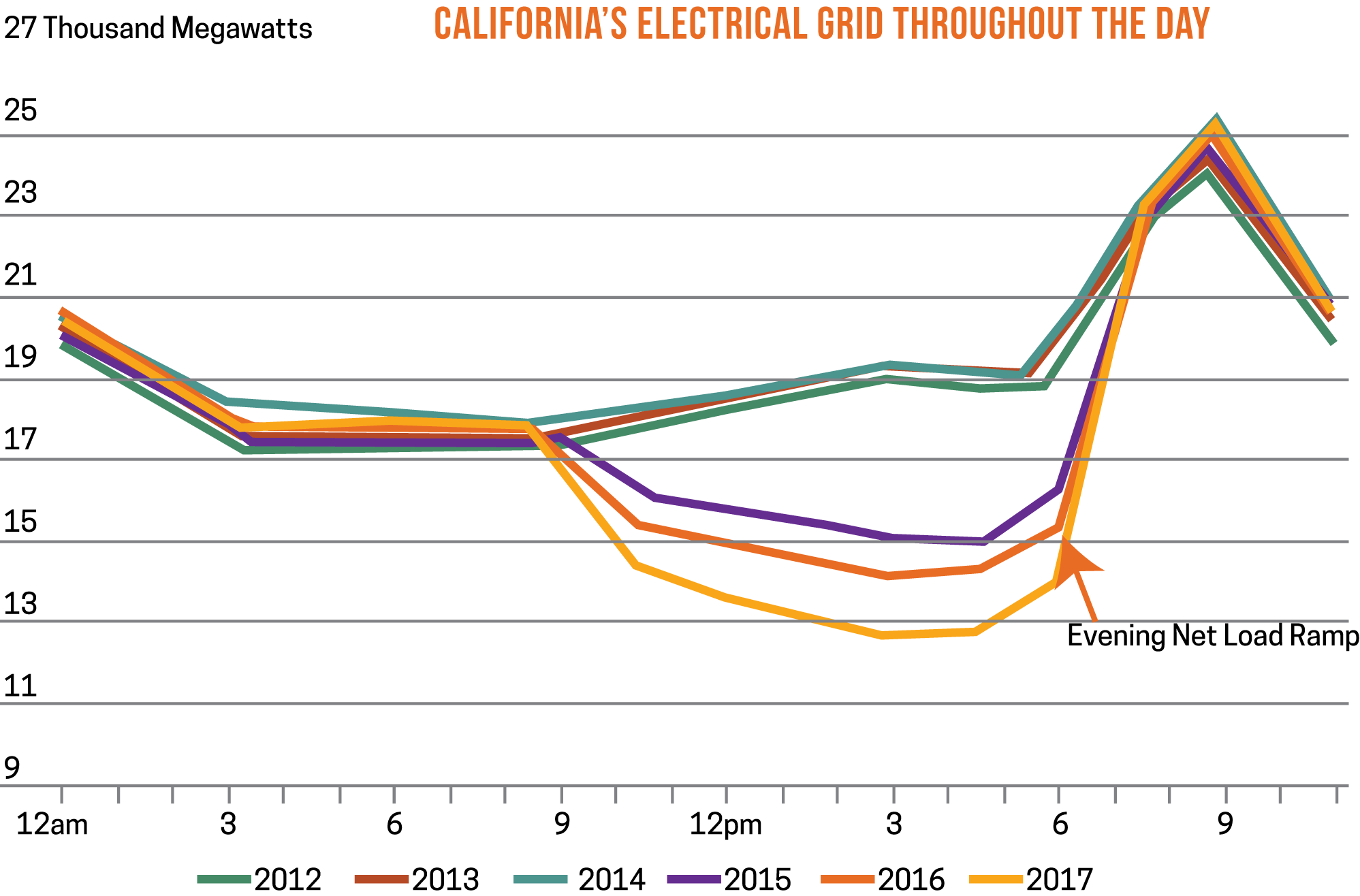 So now there’s concern about “grid harmonization,” and the State is indicating that future versions of the energy code will limit “excess” PV and/or require that it be countered by onsite energy storage to address this imbalance. Even now, “excess” solar energy production is effectively discouraged by utility rate structures that ensure you will never see good value for PV capacity above and beyond your own annual electricity load — not even when it’s there to compensate for natural gas use, for example.

Paradoxically, the State has also acknowledged that as it moves to higher levels of clean energy (via increases in the renewable portfolio standard, or RPS), in the next couple of decades most of the new renewable energy supply will come from PVs. A bit of a disconnect?

Notably absent from presentations on State plans to address the “duck curve” are discussions of providing UTILITY-LEVEL energy storage. While eager to point out that PV is more economical at utility scale (true), they don’t seem to be nearly so quick to comment on whether it might be equally more economical to provide energy storage at utility scale (that seems likely to be true, no?!). This seems an obvious omission and should be added to the public discourse, promptly.

Also absent from the blithe comments about how, really, we should be looking to install utility-scale PV rather than putting it on all the little rooftops, is any observation about the massive ecological impacts associated with utility-scale solar developments.

My vision for a clean energy future includes a diversity of solutions, with solar on rooftops both small and large, wherever it is productive. Just as nature is not efficient, but rather smart, simple economics are not the final determinant of what makes sense. What makes sense is to preserve wilderness for all its uniquely important values, and limit the footprint of intrusive human developments such as solar farms to the greatest extent possible.

Reflections here provoked by some of the presentations at this week’s excellent Symposium on Zero Net Energy Buildings and Beyond, presented by the Emerging Technologies Coordinating Council. My thanks to all of the organizers and speakers for your contributions!

Yesterday, the Net Zero Energy Coalition (www.netzeroenergycoalition.com) released its 2016 inventory report, To Zero and Beyond. The number of zero-energy (plus/minus) homes in the US and Canada increased 33 percent over the Coalition’s baseline inventory – 8,203 residential units completed, in construction, and in design vs. 6,177 units in 2015. The number in the pipeline is even more impressive, with just under 30,000 in the planning stages. The numbers also represent an upward trend in terms of energy performance.

Read the whole report at http://netzeroenergycoalition.com/2016-zero-energy-inventory/.

On May 2, the Canadian Home Builders’ Association launched its Net Zero Home Labeling program for both full zero-energy and zero-energy-ready homes. Instrumental in creating the program was Sonja Winkelmann, one of Canada’s foremost experts in zero energy and former executive director of the Net Zero Energy Coalition (www.netzeroenergycoalition.com). Read more about the new program at www.chba.ca/nze.

1180 Fourth Street marks the corner of 4th and Channel Streets as a gateway to San Francisco’s newest neighborhood, Mission Bay South. This setting carries civic obligations unusual for an affordable housing project; it demands a welcoming, well-made and richly articulated building to set the standard for development to follow on the surrounding blocks. As a community-oriented development for 150 low-income families, this building must hold its own amongst larger, more expensive market-rate neighbors and biotech campuses. The project includes 11,000 sq. ft. of retail space lining the Fourth Street corridor, anchored by a corner restaurant space, and a community building facing Channel Park to serve the greater neighborhood. Common areas include two mid-block courtyards and a rooftop garden; a teen room, exercise room, day care and supportive services. The building is designed to achieve a LEED® for Homes Midrise Platinum rating.

This is my blog.